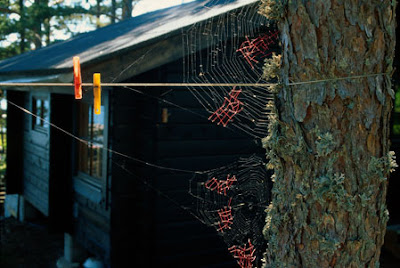 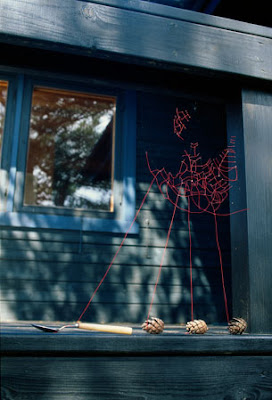 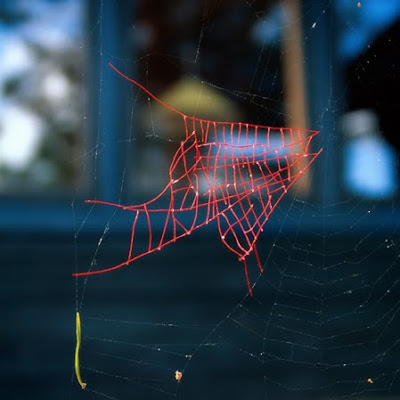 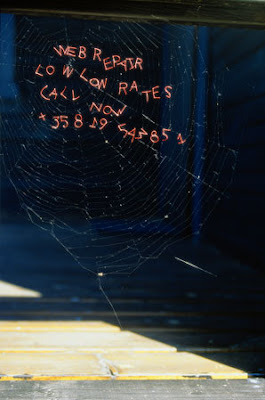 excerpt from Nina Katchadourian's site:
The Mended Spiderweb series came about during a six-week period in June and July in 1998 which I spent on Pörtö. In the forest and around the house where I was living, I searched for broken spiderwebs which I repaired using red sewing thread. All of the patches were made by inserting segments one at a time directly into the web. The short threads were held in place by the stickiness of the spider web itself; longer threads were reinforced by dipping the tips into white glue. I fixed the holes in the web until it was fully repaired, or until it could no longer bear the weight of the thread. In the process, I often caused further damage when the tweezers got tangled in the web or when my hands brushed up against it by accident.
The morning after the first patch job, I discovered a pile of red threads lying on the ground below the web. On closer inspection it became clear that the spider had repaired the web to perfect condition using its own methods, throwing the threads out in the process. My repairs were always rejected by the spider and discarded, usually during the course of the night, even in webs which looked abandoned. Each "Rejected Patch" is shown next to the photograph showing the web with the patch as it looked on site. http://www.ninakatchadourian.com/uninvitedcollaborations/spiderwebs.php
Special thanks to http://thebesttimeoftheday.blogspot.com/ for exposing me to Nina's work.
Emil "Rocky" Fiore: Real spiderwebs mounted on glass 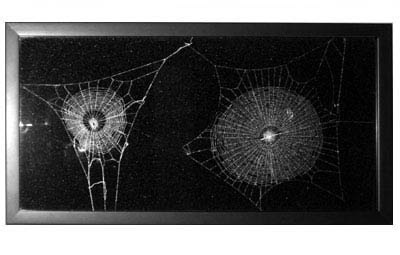 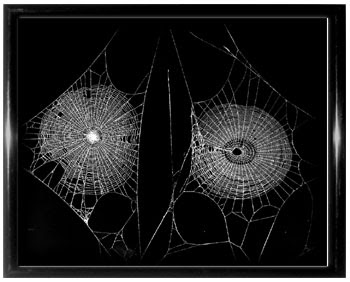 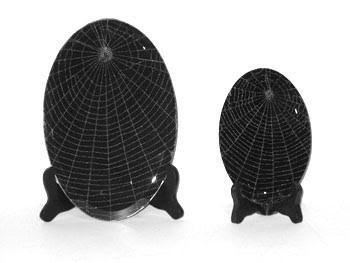 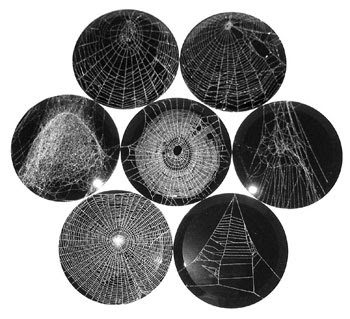 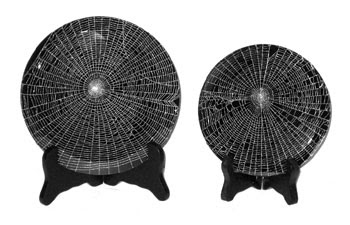 The other week Sara and I bought one of these spiderweb plates for a friend. They are sold at Catbird in Williamsburg. The creator, Emil "Rocky" Fiore carefully seeks out each web, never harming the spider, then mounts them in a special way he devised after years of trial and error. Details about the species of spider are on the back of the plates. Check out Coolhuntings video of his process. It's amazing. http://www.youtube.com/watch?v=97X7WiAOtMM and his website here http://www.whirledwidewebs.com/.
Posted by Karen and Sara Brown at 11:44 AM

Email ThisBlogThis!Share to TwitterShare to FacebookShare to Pinterest
Labels: artist, black and white